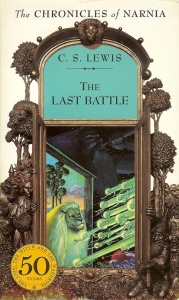 Put in story form that a child can understand:

Then Aslan turned to them and said: “You do not yet look as happy as I mean you to be.” Lucy said, “we’re so afraid of being sent away, Aslan.” “No fear of that,” said Aslan. “Have you not guessed?” Their hearts leaped and a wild hope rose within them.

“There was a railway accident “ said Aslan softly. “…All of you are – as you used to call it in the Shadowlands – dead. The term is over: the holidays have begun. The dream is ended: this is the morning.”

And as he spoke he no longer looked to them like a lion; but the things that began to happen after that were so great and beautiful that I cannot write them… But for them it was only the beginning of the real story. All their life in this world and all their adventures in Narnia had only been the cover and title page: now at last they were beginning chapter One of the great story which no one on earth has read: which goes on forever: in which every chapter is better than the one before.

One thought on “The Blessed Hope of Eternal Life in Christ”